Format: Feature; Comedy - 93 pages
​Logline:
LONDON, 1969: A dopey psychedelic rock duo rack up a huge studio debt while recording their debut album. To pay it off, they rob a bank and all goes surprisingly to plan… until a piece of rock history unfolds on the roof of the building next door.

Request Screenplay
"clear, action-driven writing, and it’s compelling from fade in to fade out."
"so simple but so ingeniously effective"
"dialogue is consistently witty and hilarious"
"genuinely touching"
"a hugely original and comedic idea with a great central relationship at its heart. "
"a love letter to classic rock, British comedy, and friendships between creative partners – and it all works like gangbusters throughout the entirety of the script" 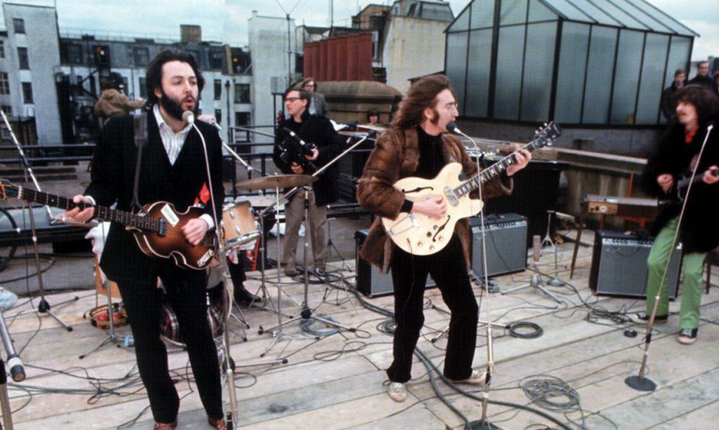 A fictional story, about fictional characters set against the backdrop of a bona fide moment in musical history - The Beatles' impromptu rooftop gig at their Savile Row offices on 30th January 1969 (which would prove to be their final live performance ever).
Synopsis:
London, 1969: psychedelic rock duo Keegan and Jasper, a/k/a Groovy Soup has just recorded their debut album. BUT, they’ve run over on studio time and their ruthless label boss (who is also a gangland big-shot) threatens to destroy the master tapes unless they pay their debt.

Desperate for the world to hear their music - which they are convinced has the karmic power and energy to end the Vietnam War - they resort to an even more desperate solution: rob a bank. All goes surprisingly to plan until rock history unfolds at the building next door as the bloody Beatles play an impromptu gig on the roof. With the police, public, media and the Fab fricking Four all blocking their escape, Keegan and Jasper are trapped at the scene of their crime.

With tension escalating and the clock ticking, there is a distinct shortage of peace and love in the bank stairwell. And when the ill-gotten proceeds of their hare-brained raid are accidentally shredded to smithereens in a scuffle involving an antique firearm and a scuffed guitar case, Groovy Soup become the first band to split over musical, personal AND criminal differences.

Their dreams of rock stardom and world peace literally in tatters, each man makes his own getaway... with dramatically varying outcomes.